Take Me Out to the Ballgame

It's Baseball Season! Yay! I love baseball, always have, always will. I don't have a favorite team as I did when I was a kid...way back then it was the Cincinnati Reds....I totally LOVED Johnny Bench!! Yeah I know...I was born in Texas and by all accounts should have been an Astro or Ranger's fan. Well...I prefer the National League and I'm more of a closet Astro Fan...I only come out if they're winning but stay hidden when they're losing...which is often. The Astro's are the "choke" team of the NBL. A n y w a y...

The season also kicks off for my son, who's playing on his 8th grade middle school team. Jeremy has been playing baseball his whole life...I think he's even a ballplayer reincarnated. Even as an infant you could sit him in front of a game and he'd sit quietly and watch. He especially loved watching his older brother play little league. When he was old enough to stand he'd entertain himself by practicing his batting stance using a plunger as his bat. 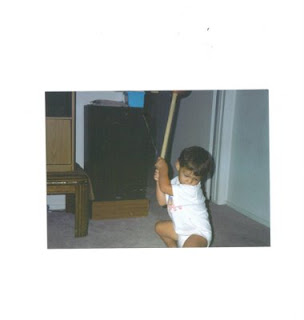 By age 3 he'd started calling himself Jeremy Bell after his favorite Astro Derek Bell. He finally started playing t-ball at age 5 and has only missed one season in the last eight years (and that was because he decided to forgo fall ball for football.) He even used to be superstitious about batting...up until third grade he wouldn't go up to bat unless I blew him a kiss first. ha ha
Jeremy's dream is to play infield for the Houston Astros, he's even learning how to pitch and has a very hard fastball! He can actually and has actually played every position on the field including pitcher and catcher. I think this year they have him infield at 3rd base.
So, today is the first game for the Pueblo Bulldogs. I'm really looking forward to it. Sadly, my husband has to go out of town this week so he can't make it. But I'll have plenty of pictures I think.
Okay, this has become my brag about Jeremy blog. Ha! What can I say....as they get older I find myself thinking about how little time I have left with them before they go off and live their own lives. Of course, should Jeremy make it to the majors you'll find me front and center at the games...ready to blow him a kiss should he need it. =)
Posted by Terri Molina at 8:43 AM 0 comments