Day One (actually Two) at the RWA Conference

It's nearing the end of day two of the RWA national conference in San Francisco and this is actually the first chance I've had to post a blog. I actually wrote one up long-hand this morning while waiting for the Opening Session (or whatever they called it) to get started, but I left it in my room. Right now I'm in the "internet lounge" where I can access the web free. Hey it's worth it to lug the laptop for free accesss as opposed to paying thirteen dollars a day.

Anyway. The conference, as always is quite an event. The Marriott, where it's being held this year, is very nice but like most of the hotels they choose, there isn't much of a bar. (and I've yet to hit it up for a drink....first on my list when I'm done here.) The chattering of woman is pretty loud and it's hard to hear the person next to you much less your own thoughts. But it's still a good time, albeit exhausting, and worth the trip.

I arrived on Wednesday morning and immediately reported to work at the literacy signing. I had volunteered to help set-up and stayed through until about 7:30 that evening, when it ended. Although I was "working" I got a chance to meet up with several of my writer friends (as well as make new ones.). Here are a few of the photos I was able to take: 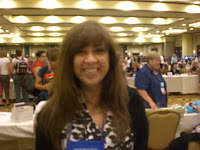 Toni McGee Causey at the Literacy Signing. She's such a sweetheart! If you haven't read her book Bobby Fayes Very (very, very) Bad Day....you're really missing out on a great book! Buy it...now...now....now!! 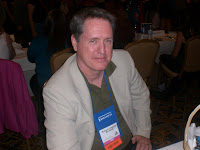 Robert Gregory Browne. This was his first RWA conference...can you tell he's overwhelmed? ;-) He's a great guy! I had lunch with him, Toni and Jordan Dane today (Day 2)...such great people. Toni and Robert even gave me some great advice about my book....and it seems Robert and I are both working on the same kind of story....guess I don't need to say who's will be better. ;-P 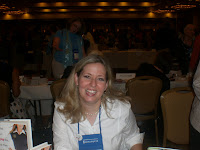 Then of course there's Ally Carter.

She's just as adorable in person as her picture shows.


She kept teasing me about stalking this guy. 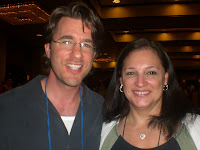 It was purely coincidental that I just happened to be going in the same direction as he....a few times. hehe. I think she was just jealous because I took three pictures with him. 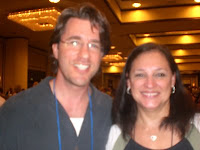 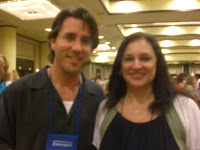 Oh, okay. She got to take one with him and her agent, Kristen. 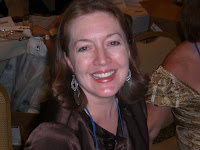 There is also the very lovely and very photogenic Danielle Younge-Ullman, who's book is out NOW! 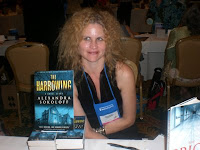 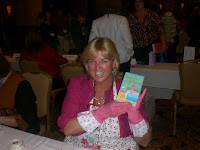 Jenny Gardnier
all decked out in her June Cleaver outfit! Too cute! 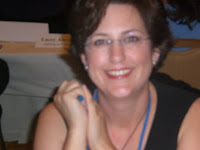 Allison Brennan
A Double Rita finalist!! Such a wonderful person! 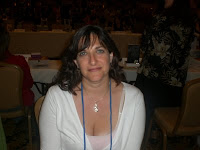 Eileen Rendahl. I met Eileen a couple of years ago when my friend Rhonda spotted her and said, Hey, you two could be twins! So...now we're long lost twins. She's a sweetheart!


Anyway...the signing was huge, as it always is. I was posted at the side entrance so I could let in the authors and other volunteers. Alot of the authors had their own personal entourage...husbands, mothers, children....one author (can't remember who...but she writes Vampires---which I figured out when I saw her 'fangs') even had a couple of official 'hotties' with her...I guess they were for role play or something. (not that kind of role play!) There was a big to-do when "the queen" showed up. Lights flaring, cameras rolling....okay...I love Nora...but give me a break, that entrance was soooo over the top! And, poor Stephanie Bond chose the exact same time to enter the ballroom and was smashed up against the door while the official entrance commenced.

After the signing ended I met up with my Houston chapter mates and went to dinner. Just that hour of sitting made me realize how tired and sore I was! I went straight back to my room, took a hot shower and went to bed!

This morning I got up early enough to make it to the opening ceremonies. Something new they're doing I guess. No workshops or appointments were scheduled. Well, actually, workshops were this afternoon. I went to two, which were good (Susan Elizabeth Philips--who's always great to listen to. And one by Hilary Sares...who came with her own cartoon drawings and was really fun to listen to as well).


So...now, the day is over and it's time to hit the bar! Tomorrow will be filled with workshops, more booksignings, more schmoozing and likely more drinking! I may even try to worm my way into an agent/editor appointment...provided one I'm interested in opens up. We'll see.

Until tomorrow!
Posted by Terri Molina at 11:43 PM 0 comments

Anyway, I love going to conferences because it gives me a chance to meet up face to face with all my online friends and, as in the case of RWA, my idols.

The first day of the conference there's a huge booksigning with over 450 authors signing new and older books. The money raised from the signing goes to the local Literacy foundation of whichever city is hosting the conference. I have a lot of friends signing their books, which means I'll be bringing home a lot of books! I've been holding off buying them because I knew they'd be at the signing.

Anyway, the conference runs from July 31-August 2 and is filled with workshops by such wonderful authors as Lisa Gardner, Toni McGee Causey, Jayne Ann Krentz as well as spotlights on most of the publishing houses. The conference ends with an awards ceremony where we learn who won the Rita and Golden Heart contests.

I'm planning to blog from the conference, a day by day of the events as I recoup before crashing into bed. I'm also planning an article for the October issue of The Scruffy Dog Review. I'll even have pictures, maybe even a bit of a video, because my darling daughter is letting me use her digital camera. So I hope you'll join me for that.

Anyway...if you're not able to make the conference, maybe you can enjoy it vicariously through my blog.
Posted by Terri Molina at 6:09 PM 0 comments

June was a very busy month, so I apologize for the lack of a blog update.

The virtual book tour I did with several other Cobblestone authors went well. I hope you enjoyed the wonderful guests I had. I had a lot of fun. But I have to admit, writing a blog a day for two weeks wasn't easy. Over the weekend of July 13 --I put in an appearance at Killer Fiction....we can blame my friend Christie Craig for that one. My topic was a witty look at Writing What You Know. It's still available if you want to swing by and read it. You should also check out Christie's weekly blog...that girl is a hoot!!

Anyway, sales for my book Her Will His Way have been looking good. And I've been getting some wonderful reviews from a handful of online writing sites. You can find them at these places:

And, finally, I want to send out a very big Thank You to everyone who participated in my contest last month...and again, I apologize for the delay in posting about it (time just seems to get away from me these days!).

There were some wonderful stories sent in but by popular vote (I had to recruit my daughter and her friend as judges to help me choose) the winner of the most romantic gift ever recieved by their significant other is Layla Aaron.
Layla wrote:

I'm hard pressed to select the *most* romantic gift the Welshman ever gave me;
however, I'll go with the CD of Satie music. I was visiting him in Wales, our
first face to face meeting, and as a farewell gift he bought me the CD. He told
me he'd been tempted to buy me flowers, but they would die and he wanted to give
me something I could take home, something for me to remember him by forever.

Layla, drop me an email at TerriMo2@yahoo.com with your mailing address so I can send you your prize.

As for other contests....stay tuned....I may come up with another one.

One more thing. I recently did an interview at E-Cata Romance. So if you're at all interested, you can find it here.

Have a wonderful weekend!
Posted by Terri Molina at 11:46 AM 4 comments